Have you ever heard your spouse talk about someone over and over, but never had the chance to meet them? Someone they had met before you were together? You’ve heard so much about them that it’s almost like you know them, even though you’ve never seen them in person?

Last weekend I had the privilege to finally meet Mr. and Mrs. Gardner.

They had a huge impact on Tom when he was first saved for they modeled the kind of marital love that birthed in Tom a desire for the same when he found a wife (me) :-). We have mentioned them before as the couple who never went to bed without the other. If one wasn’t tired, they laid in bed and read so the other could sleep. How sweet is that?

What a privilege it was to sit at the lunch table with them and hear my husband thank them for the lessons their love taught him. Tears welled up in all of our eyes because we knew this was a moment that glorified God for the faithfulness they had demonstrated to each other and to the vows they said on their wedding day. Certainly they have weathered the storms brought on by decades of doing life together, and have come out on the other side all the better for the struggles.

Their greatest trial was when continents separated them while he served in Vietnam.

They shared with us how they kept their love alive during this dark season of their marriage. They sent recorded messages to each other every week and wrote letters every day. One time his letters stopped coming and Mrs. Gardner was distraught not knowing what had happened to him. She called The Red Cross, but they knew nothing. She waited for weeks until she finally received a letter from another soldier telling her that her husband had undergone emergency surgery in a M.A.S.H. unit to remove a kidney stone. She was relieved at the news, but wished they had told her sooner.

When we asked them the secret to their lasting love, they both acknowledged their love for God and their commitment to follow His will for their lives no matter how difficult.

We walked around their beautiful home as they told us stories about the garden they had so carefully created.

Mrs. Gardner took her trowel as we talked, and went to work digging up bulbs and plants to give us to plant in our own garden. She picked as many weeds as she did plants, which is one of the reasons her plants thrive. She not only cares for the soil, but she also pulls up anything that doesn’t belong knowing it will take the nutrients the flowers need to bloom and grow.

What a great metaphor for how to cultivate a romantic vineyard. 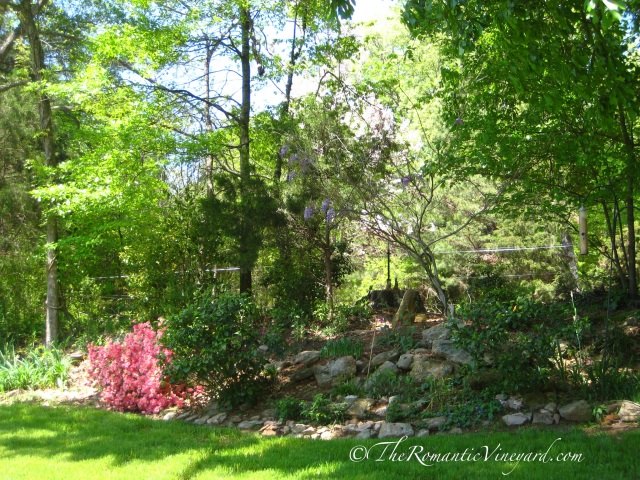 It was obvious they do this all the time. I guess sharing the abundance from what they’ve sown through the years both in their garden and in their marriage comes as easy as breathing.

Sadly, Mr. Gardner was recently diagnosed with a terminal illness, but his eyes still twinkle when he talks about his bride. What a marriage they have built, what a love they enjoy, what a privilege to have finally met them. They will celebrate 63 years together in June, and we thank God for the visible demonstration of a marriage that wasn’t easy, but stayed the course for God’s glory. We will gladly plant the flowers they gave us this past weekend, but what we really pray is that what their example has sown in our marriage will bear the kind of fruit that we can share with others in the same way.

Their daughter, Pam, pulling our wagon full of plants.

Tell us, who in your marriage has inspired you? Who has helped you cultivate your own marriage garden for God’s glory? Have you had the chance to thank them in person?

Face it, marriage is hard work. But when cultivated daily the fruit produced will satisfy for a lifetime. We're here to help with ideas and encouragement along the way. Having been married 40 years and counting, we share what we've learned with practical tips, Biblical Truths, Date night ideas to help you plow your own vineyard for God's glory.
View all posts by Debi Walter →
This entry was posted in Aging, Christian Marriage, Growing Strong Marriages, Seasons of Life, Testimonies, The Gospel & Marriage and tagged Garden, Herb, Home, marriage, Plant, Relationships, Sowing, Vietnam. Bookmark the permalink.

21 Responses to Meet The Gardners