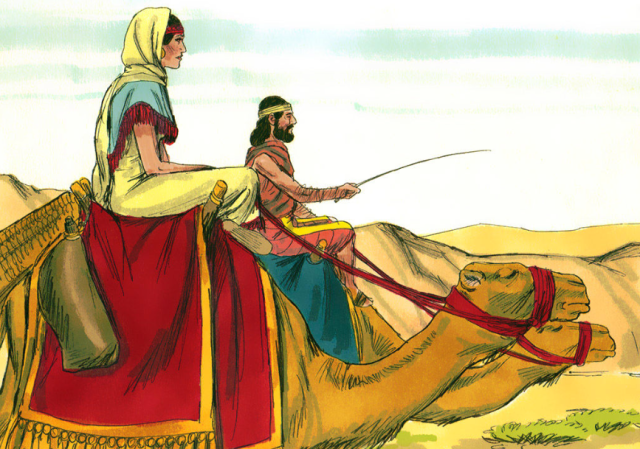 Tom and I are reading through the Bible this year and are on the part in Genesis of the story about Isaac and Rebekah. I absolutely love this story; it wreaks of faith in God, trust in His provision and enjoyment of the gift.

First, in regard to faith in God…

Isaac was a child of promise. Born to his father and mother very late in life, he was born for something bigger than he could have ever dreamed. His dad had great faith that what God had spoken He would do. Isaac had witnessed first hand how God provided a sacrifice in his place. And now it was time for God to lead him into the future He had prepared for Him. Isaac was the main character, but He hadn’t written the script. He knew in his heart that God was the author of his story. So when his dad told his servant to go and find a wife for his son among his people back home, Isaac was full of faith that it would happen just as his dad had said.

(Step into today for a minute and think about this. You know that someone who works for your dad is going across country to find you a wife, sight unseen. What?! That seems irresponsible, presumptuous, even foolish to some degree, doesn’t it? Don’t you have to go out for awhile to see if you’re compatible, if you like the same things, if your families gel. But not here. Those times were so different from ours, but one thing is the same and always will be. Marriage requires a step of faith that God has led you both to a life-long companion who will help you accomplish His plan for your lives. It can be scary. I know I had a deep awareness that my life was about to change forever, and I had faith that it would be good.)

We aren’t told how long Abraham’s servant was gone, but it must have been awhile. Life on the ranch had continued as normal with Isaac just returning from a nearby village. He had been waiting and waiting to see his dad’s entourage returning on the horizon. It was sunset and he had taken a walk to talk with the Lord. Can you imagine that conversation? It could be that he struggled to believe that his dad’s servant would return with a wife for him. We aren’t told, but Isaac was human. He struggled in the same way we do when we’re told to wait.

(How well do you wait upon the Lord? Especially when what you’re waiting for is a deep desire of your heart? Honestly, it’s difficult to have trust that God will provide. When I was younger I struggled with this more, in the same way I would have expected Isaac to struggle. However, the Bible doesn’t elude in any way that Isaac struggled with the waiting. After all, he didn’t have the benefit of connecting with relatives across long distances. There was no internet, no phone and no way to get there except for a long, hard trip on the back of a camel. Isaac had no other choice but to trust God to provide His heart’s desire. Not to mention it was God who had promised to make a great nation out of his father’s offspring, right?)

Thirdly, when Isaac finally saw on the horizon what his heart had longed for, he was full of expectation and excitement…

This is the part of Scripture I can see playing out vividly on the big screen in slow motion. 🙂 Rebekah sees Isaac at a distance and inquires who he is. When she discovers it is the man she will soon call her husband, she moves toward her future with humility, faith and expectancy. I imagine Isaac may have dropped everything as he walked and then ran towards her, anxious to finally meet God’s provision for him.

There was no planning, no courting period, not even a wedding. Just a confident trust that God had secured a life-long partner for Isaac and a means for a future family of heirs. And he enjoyed what he had been given. Isaac took Rebekah into his mother’s tent (who had recently died) and there they consummated their marriage.

Fast-forward to Genesis 26 where Isaac and Rebekah were in the midst of a great famine. They had started a family – twin boys – and they needed to move to a city to survive. This is where it’s evident that Isaac greatly enjoyed the gift God had given him in Rebekah:

So Isaac settled in Gerar. When the men of the place asked him about his wife, he said, “She is my sister,” for he feared to say, “My wife,” thinking, “lest the men of the place should kill me because of Rebekah,” because she was attractive in appearance. When he had been there a long time, Abimelech king of the Philistines looked out of a window and saw Isaac laughing with Rebekah his wife.

I love this! Especially in a culture where women are not valued. Here is Isaac not only happy, but laughing with his wife.

We have all been through seasons requiring great faith in God, trust in His provision and best of all, the chance to enjoy the gift of marriage. We encourage you to spend some time together recounting God’s faithfulness in your marriage, His provision for your family and thank Him specifically for all He has done together in prayer.

Face it, marriage is hard work. But when cultivated daily the fruit produced will satisfy for a lifetime. We're here to help with ideas and encouragement along the way. Having been married 40 years and counting, we share what we've learned with practical tips, Biblical Truths, Date night ideas to help you plow your own vineyard for God's glory.
View all posts by Debi Walter →
This entry was posted in Biblical Encouragement, Christian Marriage, Love Stories, Testimonies, Thankfulness and tagged Isaac and Rebekah, love stories. Bookmark the permalink.

6 Responses to Meet Isaac And Rebekah