As we continue our Going For The Gold In Marriage series we cannot overlook the inspirational stories of the Olympic Torchbearers. Each runner is chosen for their personal contribution in life. It may be an 81 year old woman who has spent her life as a nurse helping others, or it could be a man in his 40’s who has epilepsy who has learned how to live an active and productive life without limitations. Whatever the reason for their being selected, the mission is the same–to carry the torch from its starting point to its finishing point.

It is an honor to carry the flame. 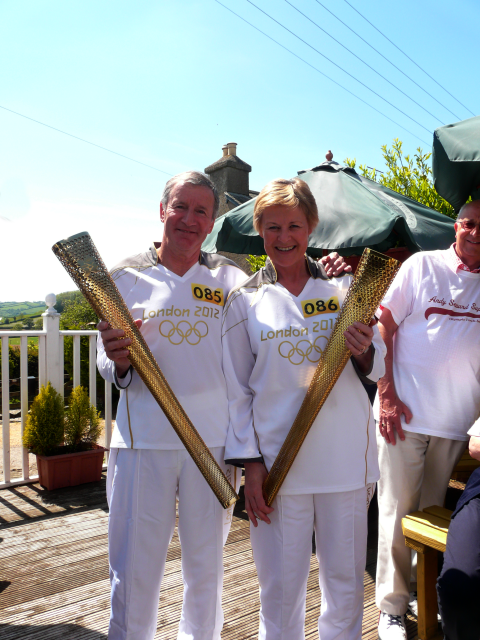 Meet the Allens. They were each selected to carry the torch on Day Two of the 8,000 miles race. Unlike a normal relay where the torch is actually passed from one runner to the next. In this race it is the flame that is passed from one torch to the next. It is called “the kiss.” Frank Allen ran towards his wife and was honored to pass what he had been given to his wife, Jane. Not only did their torches “kiss,” but he kissed her as well.

What an example for our marriages.

When we said our vows, we were in a sense, given a torch to carry. It is the torch of the glory of the grace of God. We didn’t start the flame. It was lit on Calvary when Christ secured our eternal reward through His death, burial and resurrection. He is the hope we carry within us and the reason we can faithfully run this marathon called marriage.

Sure there are obstacles along the way and weather to endure, but God has promised the flame will never be extinguished. What good news! Whatever trial or difficulty you’re facing in your marriage right now, there is grace available to help you not only carry the torch, but to hold it high.

When we get to the end of our life may our stories inspire others and point the way to the Grace of God, available to all who will but ask.

It is an honor to hold the torch for Christ.

What’s your story? How has your marriage held the torch of God’s grace high for others to see and follow? What obstacles has He helped you overcome together? Let’s marvel at His grace today.

4 Responses to We Are Torchbearers