The year was 1957.  The centerpiece of Lake Eola had been a small fountain built in 1912.  That was until this year.  The small, insignificant fountain was replaced with what became know as, “The Centennial Fountain.”  And it became the unofficial symbol of Orlando from that year on.

In 2009 this beautiful fountain, although over 50 years old, was still going strong until a lightning bolt struck it, knocking the life out of it.  With Orlando’s budget cuts being the most severe in decades and a $500,000 deductible on the insurance policy, the fate of the fountain wasn’t sure.

With the public and private donors support, the mayor of the city declared that they would indeed repair the fountain, and not only repair her, but replace her fading and cracking skin with state-of-the-art technology.  Our fountain was getting a much needed facelift!  And we must say she is more beautiful than ever. (You can purchase a piece of the old fountain skin as a souvenir – click here for details!)

On the 4th of July, Tom surprised me with a night away at the Embassy Suites Hotel located across the street from the lake.  Having been born right here in The City Beautiful, Tom knows my affection for this place.  He knew I would love nothing more than to be a part of the Grand Reopening of the Lake Eola Fountain with the Independence Day Fireworks at the Fountain show.  He was right! 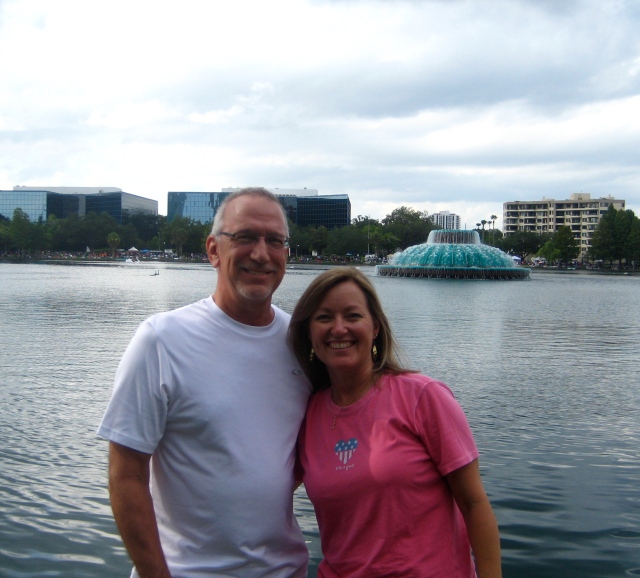 We got there early in order to get a good seat on the shore.  It was a beautiful day, quite comfortable in the shade, which isn’t always the case in July.  Only one problem, the clouds were gathering.  Little did we know we were in for a storm that would dump inches on the park in one short hour.  It was literally raining on our parade!

We ran to the nearby Publix, purchased a couple of umbrellas and still proceeded to get drenched from the wind-driven deluge.  I think it rained sideways!  We weren’t sure if the show would go on.  People were leaving by the droves.  But go on it did, and we were not disappointed.  Neither were the thousands of spectators who returned after dark to see the show.

This lake happens to be the place Tom took me after dinner on our first date.  I remember walking around the mile long circumference of the lake wondering if he would hold my hand.  It was a new beginning for us and the old fountain was our witness then, and we witnessed a new beginning for her on Monday.  It’s as if we’ve come full circle – like the sidewalk around the lake, and THIS time Tom held my hand!  🙂 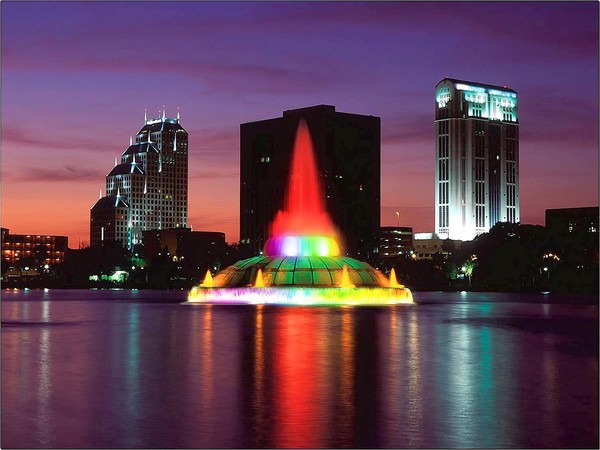 If you are planning to visit Orlando, you must take time to see this historic landmark, or should I say “lakemark!”  It is, in my humble opinion, one of the best sites we have to offer.  There are lots of restaurants in the downtown area to which you can walk, as well as a very nice stadium-seated theater – The Plaza Cinema Theater with it’s own cafe.  There are clubs for dancing and halls for various concerts.  The newly built Amway Center offers a plethora of entertainment.  We have the Sak Comedy Club as well as The Bob Carr Performing Arts Center.

Yes, Orlando is still a small city, but it has a big heart and is eager to embrace budding love as well as strengthen long-lasting love;  We should know because she has been a witness to ours! How appropriate that one of the fireworks at the fountain was a big red heart! 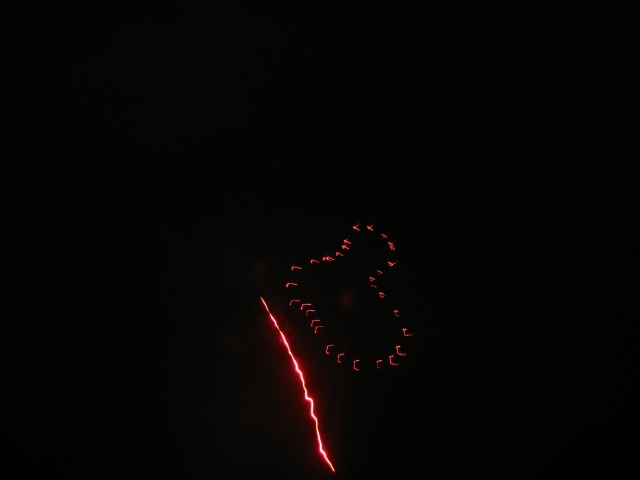 For a complete history of the Lake Eola Fountain we’ve provided the following video:

Face it, marriage is hard work. But when cultivated daily the fruit produced will satisfy for a lifetime. We're here to help with ideas and encouragement along the way. Having been married 40 years and counting, we share what we've learned with practical tips, Biblical Truths, Date night ideas to help you plow your own vineyard for God's glory.
View all posts by Debi Walter →
This entry was posted in Date Night Ideas, Free Dates, Orlando Date Ideas, Outdoor Dates, Romantic Orlando, Sunset Dates and tagged Amway Center, Downtown Orlando, Food Not Bombs, Lake Eola, Lake Eola Park, Orlando, Orlando Florida, Publix. Bookmark the permalink.