Every athlete, no matter what country they represent, has one. The athletes listen to their every word and look to them first for their approval after their performance. In watching the Olympics I’ve been struck by their influence. Who is this person?

Their coach has been with them from the beginning, helping them form their goals, strengthen their skills and polish their performance. They provide the wisdom needed for the aspiring Olympians. Without them, no one would have a chance to succeed. And when they do succeed no one cheers louder, except maybe their parents. 🙂

So why is it we think marriage is less deserving of this kind of input? What if we were to have a marriage coach to help us, train us and watch over every conversation to make sure it was leading us and our relationship toward our stated goals.

We do have a marriage coach, but are we listening to Him?

The Holy Spirit has been given to us to help us remember what is of most importance. Even the disciples were unsure they would be able to remember all that Christ had taught them in His three years of ministry. But Christ assured them He would send them a Helper who would bring to their remembrance all that He had instructed them. And He was faithful to His promise.

We have the Holy Spirit to help us grow our marriage for His glory. But are we listening? Do we take time to hear what He is saying to us today about our latest conflict? Our latest challenge? Our latest blessing? He has a purpose for our marriage in everything we face together. Is it an obstacle we’re confronted with? Then, know that God is wanting to help us overcome it. Is it a continual argument between the two of you that never seems to have an answer? Then, God is after something in the struggle.

God wastes nothing, not even our disagreements. He uses them to grow us and make us stronger as a result. We are not alone, and better yet, God has promised He will complete the work He’s begun in our hearts and our marriage.

Let’s listen to His voice today. He’s calling us to endure, to not give up, but to press on, in order to become all He has purposed for us to be.

In 1996, the U.S. Women’s gymnastics team was up against Russia for the gold. We had one opportunity to finally defeat them, but the challenge grew as one gymnast fell not once, but twice threatening the lead the United States team had secured. It was up to one athlete, Kerri Strug, a 4 foot 9 powerhouse from AZ. She would prove to a watching world what devotion and determination look like.

She performs a difficult vault that requires a handspring and a twisting dismount. As she descends through the air toward the ground, she slips on her landing and falls on her backside. She also hears a snap in her left ankle. There is disbelief in the crowd. The gold, it appears, is gone when Strug’s score — 9.162 — is flashed on the board.

Strug falls to her knees, disregarding her injured ankle. Her parents, sitting in the stands, cover their faces. As Strug rises and begins psyching herself up for her second and final vault, pain shoots through her leg. Turns out, she has suffered two torn ligaments in the ankle.

Left to herself she may have given in to defeat. But listen to what her coach does next:

U.S. Coach Bela Karolyi walks over to the ailing Strug, puts his arm around her and says softly, “Kerri, we need you to go one more time. We need you one more time for the gold.”

Strug rises from the floor, removes the ice pack from her ankle and says a prayer: “Please, God, help me make this vault.” She’s performed this vault more than a thousand times. “I know I can do it one more time, injured ankle or not,” she thinks to herself.

Her coach appeals to her. He reminds her of her goal and how close it is. He assures her he will be with her afterward to help her, only give it your best, he pleads.

Strug sprints down the runway on her damaged ankle. Across the way, the Russian gymnasts, stop and watch. Strug leaps high into the air. She performs a back handspring onto the vault, perfectly. Then she descends through the air, toward the ground. Everyone on the sidelines and in the crowd winces, knowing that when Strug lands, it’s going to be as painful as someone smashing a medal rod against your ankle.Strug lands hard on both feet, amazingly without stumbling. Yet when she lands, she hears another crack in the same ankle. She gingerly picks up her damaged ankle and folds it behind her, keeping her balance, to the shock of everyone in the crowd and everyone watching on TV. Her mind tells her body to stand upright for the traditional post-performance pose. She hops on one foot to face one side of the crowd, then hops again to face the other, all the while holding up her injured ankle.Strug’s teammates begin leaping on the sideline. Strug, meanwhile, hops around a quarter turn, arms raised, and forces a big smile for the judges while the Georgia Dome crowd of 32,048 lets out a roar. She holds the pose for a few seconds, just long enough to please the judges, then she falls to the floor and grimaces in agonizing pain as the ovation continues.

Kerri Strug did what her coach had asked of her. And when it came time to receive the Gold Medal on the podium, the paramedics wanted to get her to a hospital for much needed medical attention. But she refused. She wanted to be there with her team, and her coach made sure it would happen. 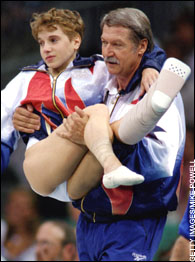 He carried her to the podium where the National Anthem was played in honor of this team of girls who were willing to go for the prize no matter the pain or the cost.

Imagine if we were to embrace this kind of commitment in our marriage?

Pain is inevitable. Hardship is certain, but God is right there with us ready to carry us when needed and support us through it all.

We offer Kerri’s prayer in closing, “Please God, help us make our marriage work for Your glory and the good of all who are watching.”

Tom and Debi have been sharing encouragements through their blogs for many years. Marriage, Reading God's Word and documenting family history is our focus. Growing in our relationship with the Lord is primary in all we say, write or do. We are grateful for all who desire to join us in the same endeavors.
View all posts by Debi Walter →
This entry was posted in Christian Marriage and tagged Christ, God, Holy Spirit, Kerri Strug, Olympic Games, Russia, Strug, United States. Bookmark the permalink.

10 Responses to Who Is Yours?