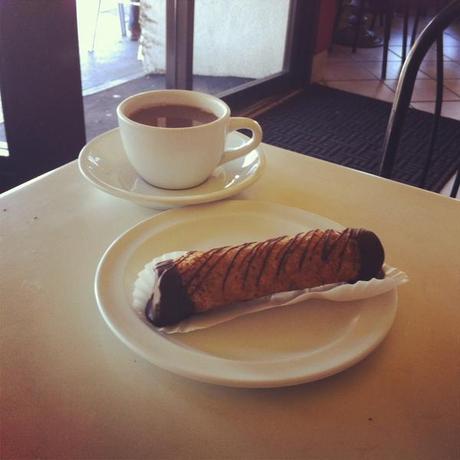 Today I want to share with you a short story I wrote years ago. With Memorial Day the end of this month, it seems the right time.

The day began like any other; after doing a once over in the mirror, Eva dragged her frame to the coffee pot in her pink laminated kitchen.  Pouring the hot eye-opener into her Stature of Liberty mug, she scooped the sugar into her cup – one, two, three teaspoons as usual.  Taking the first sip the aroma wafted her away to another time and place.

She was waiting in Vito’s Coffee Shop.  Ron was due in from sea where his unit had been on maneuvers for 6 months.  They had decided to meet here instead of at the port because Ron knew how much Eva disliked crowds.  Besides this was their spot; the one place in the City where Ron and Eva were not just another face in the crowd.

Vito Vandinelli lived in the same burrow as Eva’s parents.  He and his wife had practically raised Eva into the beautiful woman she had become, and they made sure her parents knew it.  They were like family to Eva, and always had advice to give along with a hot cappuccino and freshly baked cannolli.  Their answer to everything was food!

“What? You don’t like?” Mr. Vandinelli pushed the cannolli closer to Eva as she stared out the window.

“Love has a way of swallowing up the biggest appetite, but still you must eat!”  He insisted.

Eva knew this was a losing battle.  She took a bite of the cannolli and gently wiped her mouth with the hand-embroidered napkin.  She had to admit she was hungrier than she thought; it was delicious.

As she finished, she heard “ring-a-ling.” Looking up it was him; Ron was standing there in full uniform with the morning sun forming a halo around his black wavy hair.  He was the man of her dreams, but now very much her reality. Without words they were in each other’s arms clinging as tightly as they could fearful if they let go this moment would end.

But it never did.

For 50 years Ron and Eva woke together to the smell of freshly brewed coffee.  Without fail each year they remembered their long-awaited reunion with a cannolli and a smile.

As she swirled her finger around the rim of her cup a pang pierced her heart. The clock struck 8, signaling it was time.

Slowly she walked towards the bedroom, each step heavier than the first.  She went about the familiar room without thought and finally emerged dressed and as ready as she would ever be.

Grabbing the basket she opened the door.  A hot wind blew in her face reminding her it was indeed the middle of summer.  This did not deter her plans.

She opened the door of her 72 Buick wishing Ron were here to drive.  This was his car after all, and besides, she hated driving.  Thankfully she hadn’t far to go.

Pulling into the Veteran’s Memorial Gardens it wasn’t hard to find his plot – it was still marked by freshly turned soil under the largest oak tree on the main road.  The grounds were covered with little American Flags flying in the hot morning breeze.  It was as if they were saluting her at full attention.   But she wasn’t the one to be saluted this day.  She trembled with the realization that each flag represented a life given in service to our country.

But today she remembered only one life.  Sitting on the bench facing his grave, Eva opened her basket.  She set two plates on the bench, and unwrapped the paper holding two fresh cannolli’s from Vito’s.

Let’s cherish every day we have together, and enjoy the routine each normal day brings.  You might even want to give your spouse a cannoli tonight just because you can. It’s the little things we’ll remember best and miss the most.

Face it, marriage is hard work. But when cultivated daily the fruit produced will satisfy for a lifetime. We're here to help with ideas and encouragement along the way. Having been married 40 years and counting, we share what we've learned with practical tips, Biblical Truths, Date night ideas to help you plow your own vineyard for God's glory.
View all posts by Debi Walter →
This entry was posted in Aging, Christian Marriage, Growing Strong Marriages, Holidays, Memorial Day, Seasons of Life and tagged Beverage, Buick, coffee, Coffee and Tea, Coffeemaker, Food, Memorial Day, Shopping, Short Story For Memorial Day. Bookmark the permalink.