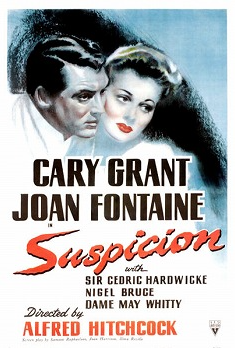 This is part two of our five part series on uncovering the practices or habits that are detrimental to marriage. Today we’ll expose another practice you may or may not be aware of in your own marriage.

Seventy-five years ago on November 14, 1941, Alfred Hitchcock released his well-known movie, Suspicion. It portrays a married couple’s journey through a web of distrust and suspicion. I won’t spoil the movie for you in case you’d like to watch it, but it’s safe to say that many of the suspicions don’t prove true.

We are often driven to suspicion because of the fears we battle.

Suspicions grow when trust in the marriage has been broken. I get that, and most of us would succumb given the same circumstances. I would even go so far as to say that suspicion can be a deserved consequence of broken trust.

However, many of us give in to suspicion because we’re listening to the wrong thoughts about our spouse.

In Genesis we’re told of how Eve encountered temptation. It came through the crafty serpent who whispered suspicions to her of God’s goodness. Satan, the enemy of God, wants to do all he can to thwart God’s plans for His people. It was true then, and it is true today.

Suspicion is born when we listen to his sinister questions:

“Why didn’t your husband tell you he’d be late? Maybe there’s someone else he’d rather be with?’

“Does your wife really care about your financial goals? She is always looking for ways to spend it faster than you both can make it.”

“Do you think other women don’t notice how nice your husband is? You know he enjoys it too.”

“Your wife is so beautiful. How can you be sure other men aren’t trying to woo her away from you?”

There is an easy way to thwart his methods though–don’t listen to him! When suspicion knocks on the door of your mind, be quick to recognize the tone of voice. If it’s accusing and cunning, you can be sure it isn’t the Lord. God leads us with a voice that reassures us and brings us together. The enemy’s voice is divisive and suspicious. (For further insight check out these synonyms and antonyms of suspicion)

Let’s not give him an ear to hear. Instead let’s be alert and ready to resist this temptation for the sake of our marriage.

3 For though we walk in the flesh, we are not waging war according to the flesh. 4 For the weapons of our warfare are not of the flesh but have divine power to destroy strongholds. 5 We destroy arguments and every lofty opinion raised against the knowledge of God, and take every thought captive to obey Christ…”  2 Corinthians 10:3-5 ESV (emphasis added)

In what ways has suspicion affected your relationship?

Face it, marriage is hard work. But when cultivated daily the fruit produced will satisfy for a lifetime. We're here to help with ideas and encouragement along the way. Having been married 40 years and counting, we share what we've learned with practical tips, Biblical Truths, Date night ideas to help you plow your own vineyard for God's glory.
View all posts by Debi Walter →
This entry was posted in Christian Marriage, Conflict, Growing Strong Marriages, Temptation and tagged 2 Corinthians 10:3-5, Suspicion. Bookmark the permalink.